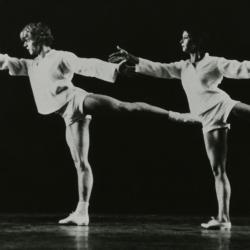 III. One More for the Road

This piece premiered during the ABT Summer Gala Evening.

Baryshnikov casually crosses the stage to shake Tharp's hand before they begin the loose but quick unison movement of the opening section. The final section, "One For My Baby," was, as Tharp explains in the television special, "made for the void between us.” Once More, Frank marks the beginning of a series of works by Tharp to the music of Frank Sinatra.

Tharp and Baryshnikov rehearse in the American Ballet Theatre studios.

3. One More For the Road
Written by Harold Arlen and Johnny Mercer
For the Musical “The Sky’s the Limit” – 1943
Recorded by Frank Sinatra – 1947
Columbia Records