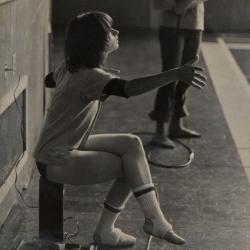 I. Mozart
Wright and Hamm

This performance was the culminating event of a residency at the American University Wolf Trap Academy.

The first section is a duet to the Mozart Sonata, and the second a duet to a song by The Mighty Clouds Of Joy. About thirty American University students performed slow, unison movement in the background while the company dancers performed in the foreground.

This was the last of the outdoor, flash mob style performances. Naima Prevots, then director of Dance at American University, remembers the performance:  "Most of the audience thought she was nuts and I loved it!"  This performance brought to Tharp's attention the reality that, though the performances were often successful, her intentions were frequently misunderstood when the dance was imposed on an unsuspecting audience.

2. Unidentified songs by The Mighty Clouds Of Joy