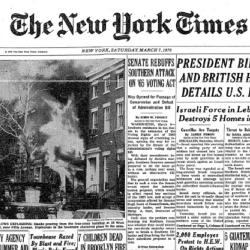 YLFYFFY…was created while Tharp's company was in residence at Sullins College, a women's university. The piece contained a solo for Figueroa which was danced twice: first topless, then bottomless. The other three dancers wore costumes that could be simply manipulated such as by rolling up a pant leg or sleeve.

It was during rehearsals that the faculty found out about the nudity and reported it to the president of the college, a man. He would not allow those sections to be performed. Before the premiere, Tharp introduced the piece, explaining that the nudity was not gratuitous but an integral part of the dance. Therefore, when those sections were to occur, the dancers would stop and mark time for the duration of each.

After the piece finished, Tharp conferred with the dancers and announced that they would perform again. The censored sections would be included and if anyone felt they would be offended they should leave. The president moved down to the front row.

The conflict around the performances inspired articles in the student newsletter questioning a male making the decisions for this all-female student body.

Tharp took the title of this work from a misprint in the New York Times to illustrate the imperfections of institutions that are assumed to be an ultimate authority. Such a major misprint as this in a highly regarded newspaper was akin to the incongruity experienced at Sullins College.